Home › General › Microsoft under fire in Argentina: it faces a fine of more than 50 million euros for anticompetitive activities

Microsoft under fire in Argentina: it faces a fine of more than 50 million euros for anticompetitive activities

About five years ago, I wrote a detailed report on how one could have the choice between GNU / Linux and other operating systems in Argentina. that was most surprising for French people, that have always had the greatest difficulties in getting such a choice, despite the remarkable efforts made by the Working Group Detaxe and Racketiciels. It was even possible at that time in Argentina to compare on the website of major retail chains (Fravega, Garbarino, the equivalent of Darty or Boulanger in France) the price for the same machine with another operating system or with a Debian-based, customised Argentinian GNU / Linux, developed by an SME named Pixart (not to be confused with the studio Pixar!).

But starting from 2 years ago, I have seen that it has become impossible to find any longer a single machine with GNU / Linux in retail: worse, we saw some very dubious agreements negotiated under the high patronage of the founder of the multinational software company that monopolises the operating systems market.

One may well ask why: this is not without reminding us of the situation here in France, where after SFR placed on the market more thatn 250000 Netbooks all equipped with GNU / Linux about two years ago, we can not find now a single netbook without Windows (yes, I write the name in full letters now, because I am particularly upset: I wanted to buy one for personal use this Christmas, but despite my efforts, I have not found a single model with a GNU / Linux preinstalled in France).

The few remaining fans of software monopolies like to say that this sudden vanishement proves that the other operating system is superior to GNU / Linux.

Well, I happen to have in my hands right now a copy of the appeal filed against Microsoft by the little Argentine SMEs Pixart, and it is very helpful in understanding what really happened there ... and very likely what is happening here too. 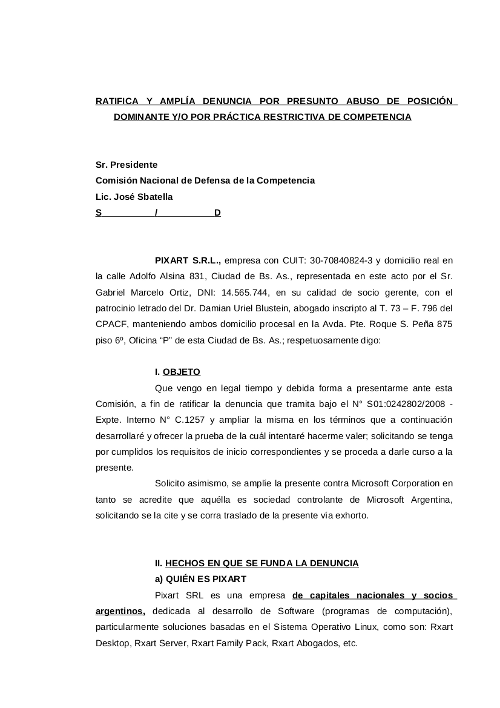 The Windows For The Poor

Microsoft does not usually sit back when it loses market share, and I already noticed back then that Redmond had put in place a strategy to counter the spread of GNU / Linux in emerging markets. In Argentina, already in 2005 they had managed to convince the government to spend taxpayer money on an operation codenamed 'Mi PC', which through a microcredit whose interests were paid by the state, encouraged the public to buy machines that are sold with Windows SE (Starter Edition, they say), better known today as Windows FTP (For The Poor). This edition sports ludicrous limitations like the following: only recognises 256 Mb of RAM (with XP, It's a little short), 80 GB hard disk (ditto), screen resolution was limited to 800x600, no local network, and you cannot open windows for more than 3 applications at once (oh well, if there is something that poor people have in abundance is time, therefore they will only run 3 tasks in parallel, and no more).

This version was sold cheaper than the standard Windows editions , with the aim to compete with GNU / Linux machines, but at that time this move made me laugh quite a bit because the early machines with Windows FTP still costed at least 500 pesos more than the equivalent GNU / Linux systems, which had no such ridiculous limitations: one really had to be poor in spirit to purchase them!

What I did not know in 2006 is that the Windows For The Poor was just a first step in the strategy: The second step was to artificially lower the final price of computers running Windows, and financially strangling Pixart, which could not charge anymore its service for pre-installation of custom GNU / Linux on machines manufactured in Argentina.

In reading the appeal filed by Pixart, we learn that Microsoft would have started in 2008 to give back large amounts of money to the whole distribution chain to convince them to buy exclusively Windows, and these sums have been disguised in various forms.

For example, I heard that Microsoft would have payed hundreds of thousands of dollars a year to some distributors, officially for the Microsoft logo to appear on the leaflet advertising the chain. Well, this kind of operation is called 'rear margin' here, and generally corresponds to an abuse of dominant position from retailers who charge abusive fees to small suppliers for purported advertising campaigns that hide forced rebates. But in our case, I have a hard time thinking that a small retail chain in Latin America has a dominant position when facing a multinational that generates profits of billions of dollars a year.

But why, you will say , is Microsoft complicatin its life like this? Was'nt it easier to simply lower the cost of licensing Windows to, say, $ 5, rather than continue to charge $ 100 initially, to repay $ 95 to distributors right after?

Well, no! Because, if we lower the cost of the officially licensed Windows FTP to $ 5, then it must be sold $ 5 everywhere, and we can no longer pretend to charge $ 200 to large customers (such as ministries in Argentina) for the full version .

It is much more interesting to pretend that the cost is 50 or 100 dollars, and find a way to give back 45 or 95 dollars under the table: on one side the illusion is maintained that the price is high and constant, on the other, one can happily strangle competition, by lowering prices only on the competitive segment (the rebate is conditioned, of course, to stopping any sale of the rival product).

This wonderful monopolistic invention has one flaw, though: it brutally violates the rules of competition, which are codified, for better or worse, in almost all countries, including Argentina. To function properly, it must be carried out in the greatest secrecy, and stay safe from prying eyes.

But it may well be that this discretion is not going to las much longer: using the laws on competition in Argentina, Pixart filed appeal, describing what it thinks is the strategy followed by Microsoft, and asking the judge to compel Microsoft, and distributors to provide all evidence of purchases, grants, rebates, in short, an account of all financial transaction, even by means of intermediaries, between Microsoft and distributors.

Pixart also suggests that the judge checks whether Microsoft properly pays tariffs for imports of these licenses: it is well known that Microsoft goes to great lengths to avoid paying taxeshttp://www.finfacts.ie/irelandbusinessnews/publish/article_10005150.shtml, so they are justified in thinking that such behaviour could have take place in Argentina too, contributing to artificially lowering prices. Indeed, another small defect of the rear margins strategy is that if we keep the official price of 100 dollars, we must pay taxes on $ 100, regardless of the hidden $ 95 rebate one then gives back to the buyer.

As for the Microsoft antitrust trial in 1998, what is most interesting for us is not so much to see the outcome of the trial (Latin America is notoriously subject to pressure from U.S. governments, so Microsoft will probably succeed to bury the procedure ), but to bring to light the documents proving discrimination in prices, rear margins, tax evasion or avoidance, in short, the cynicism and lack of scruples of this multinational whose former CEO is now posing as a great philanthropist.

This may help our own rulers to understand the mechanisms that keep France under the heel of the monopoly of a software company from outside Europe, even if we have all that is necessary to make our citizens enjoy the benefits of Free Software (which is, by the way, already powering all the boxes that we use to connect to internet).

The interest of Argentina

I confess that I am very curious to see how this process will evolve.

It is true that Microsoft is able to quickly strongarm the governments of emerging countries, as it happened in the famous case of Mandriva in Nigeria.

But this time there is a difference: if Microsoft was convicted in Argentina, my legal contacts there tell me it would risk a fine of approximately 150.000.000 pesos, which, at the current exchange rate, would amount to more than 28 million euros.

Corruption is rife there: an official, a lawyer or a witness might be tempted to pocket a tidy little sum for losing a piece of evidence, let a legal deadline slip trhough, change the judge, or any other action that contributes to bury the trial before the interesting pieces of evidence are exposed to the light.

But I hope that this time, no civil servant, no politician in Argentina will accept to earn a few pennies to help the software juggernaut deprive his country of 28 million euros, crush a small Argentinian company struggling to maintain local industrial capacity in Free Software, and imprison again the country behind the bars of a Windows prison.

I'd like to point out that you can still find some netbooks preloaded with Linux in France, for example the Hercules eCAFE EC-900 model (running a customized version of Mandriva Linux).
We are no strangers to this issue at Mandriva, and it's especially true in the education market, where our products are as fully-featured as their proprietary match, and where our pricing is extremely competitive. But it is still very difficult to win RFPs, supposedly because of hidden rebates from our competitors...

I wish you all the luck from the USA! I'm trying to create a Linux based startup but can't well because you know... How odd that no other aspect of life is sooo locked down and one sided as technology. Amazing....

Fantastic post by former Sun's CEO on his blog: here you see it again about MS pricing schema...

Bill (Gates) explained the software business was all about building variable revenue streams from a fixed engineering cost base, so royalties didn’t fit with their model…
4. On Sunday, September 19 2010, 12:07 by Ultrasurf

our source suggests that unless Microsoft pulls a legal stunt (or corruption), the major fine will soon be announced..

They posted on the same topic

Trouble for Microsoft in Argentina; our source suggests that unless Microsoft pulls a legal stunt (or corruption), the major fine will soon be announced...