In the US, a new report on Scholarly Publishing Roundtable Report and Recommendations wants to be optimistic about Open Access, but contains, as its recommendation n. 2, the following:

Agencies should establish specific embargo periods between publication and public access. An embargo period of between zero (for open access journals) and twelve months currently reflects such a balance for many science disciplines. For other fields a longer embargo period may be necessary.

I would suggest that these people, representing The People, reconsider their position: this recommendation simply states, openly and plainly, that the interest of the publisher has diverged completely from the interest of the scientists they are supposed to serve.

I would recommend to read again my old article on Scholarly Publishing, which, by the way, got the best paper award from Novatica in 2006. 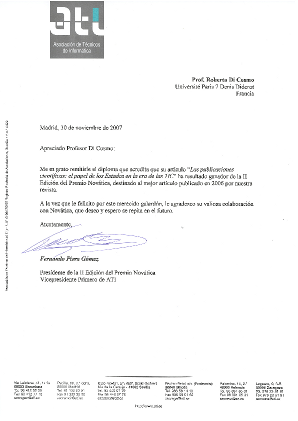 An interesting short article on why Open Access is beneficial to authors is availablehere.