Open Data for transportation at Trimet : an example to follow!

While in Portland to meet many Free and Open Source leading actors, I was delighted to shake hands with Bibiana McHugh, the visionary lady that was the driving force behind the Open Data initiative at Portland's Trimet (the public transportation company of the city of Portland). She really understood what this is all about, when saying “Our transparency allows people to use our data and develop smart, innovative mobile applications to help riders—at no cost to TriMet.”

Let me try to explain why.

Paying twice for next to nothing...

Living in France, I grew accustomed to the strange paradox of a country where we, the people, pay for state-run agencies that produce high quality data, which is not necessarily made available to the public, partly because these agencies are being encouraged to show that they are "profitable"...

Of course, the first issue is that it is not reasonable to be asked to pay twice: if the data is produced by a public agency, we already paid for it through our taxes, so why should we be charged again to access the data? Even worse, with all these restrictions on data access, we will not have that much choice when it comes to useful applications built on those data.

... or getting good service for free?

But the second, more important issue, is that for many of these agencies, making the data largely available, instead of charging for it, is the most appropriate business choice.

Consider the case of the public transportation companies: their goal is not to make some petty money selling traffic data, but to improve the overall quality of their users' journey in the area they service. And this is best achieved by providing high quality, regularly updated data to the public, enabling the development of innovative applications, that will improve the quality of transport at no cost for the public company.

Bibiana's experience show that this is not just a theoretical argument, but a concrete reality that works in practice!

Look at the Google Maps page for the city of Portland: do you see the little "bus" and "bike" icons on the top left? They mean that you can plan your trip inside Google Maps with high precision, and live data: when I searched for a bus for a trip in the city, I got precise plans, with up-to-date data based on the actual traffic.

You know what? It is impossible to do the same in Paris (France): check it by yourself. 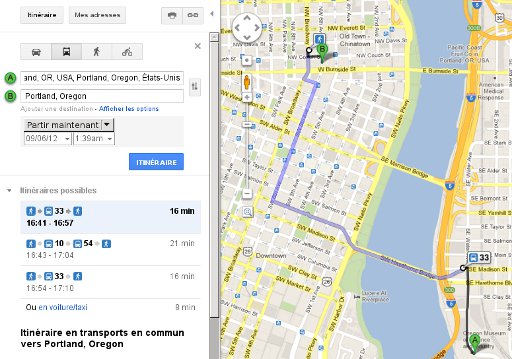 But Trimet did not write an exclusive deal with Google: they made all the data publicly available, with detailed instructions for developers, so that anybody, not just Google, is enabled to write a value added application for the users of Trimet's public transportation. Actally, quite a lot of applications have been developed, providing service to the users, and at no cost for Trimet, which reaps several benefits: informed passengers are better satisfied users, and make better use of the transportation system, which increases its value.

But Trimet did not stop there: they want to provide help for people needing multi-modal transportation (in simpler terms, people that need to mix and match bus, car, bike and the like in a single trip), and started the Open Trip Planner project, that is free for use for any other town or city that might want to follow Portland's example.

I believe it's time that many other cities start to do the same, and taking the time to talk with Bibiana would be a good start. I would be in particular delighted if Paris would follow suit.

Interesting.
I had no idea the data is not publicly available in France.

They posted on the same topic